Total Recall – not the movie 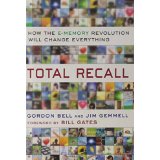 The punchline is, I cannot remember how I came to own this book, “Total Recall.” Written by Gordon Bell and Jim Gemmell, with a forward by Bill Gates, it’s all about the idea of recording “everything” about a man’s life, using (then current) technology. In the first chapter, it reveals one of many truths. This project that was a great idea, but it didn’t really have the impact predicted in the first paragraph on the inside flap of the slip cover.

The first sentence may be taken a couple of ways.

“What if you could remember everything?”

“Yikes” is my first thought. There are many things I should like to forget. “Impossible” comes next, quickly, as I imagine the scope of everything. Then, my mind drifts off to thoughts of Jeopardy and how many things we are able to recall, even if we don’t think about the trivia that lives in our memory.

Back to the book…. The last line on the inside flap says: “Total Recall is a technological revolution that will accomplish nothing less than a transformation in the way humans think about the meaning of their lives.”

Well, no. I don’t think that has happened. If anything, this book has changed the way I think about how easy it is to completely miss the opportunity to use technology to achieve meaningful progress.

There’s a very telling sentence on page 34: “I tried to get Microsoft to take the lead in desktop search….” It goes on to say, no, this did not happen. As with many things, Microsoft, with all its brilliance, did not take good advice and work on something to preserve its place as a leader in technology. If I’m reading this right, the year was 1998 and Google was working on taking that lead from the big boys.

According to Wikipedia –
The first release of Google Desktop Search was released as a beta version on October 14, 2004.[5]
And-

Today, I’m looking back at all of this and thinking my Great Grand Stories project needs backers like Gordon Bell, who understand the value in preserving the history in each of us. I’m still working on it.