Jack Ma on How to Make a Speech 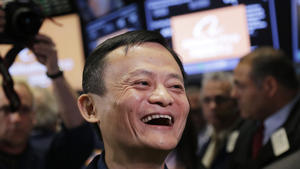 During the 40-minute Q&A session, Ma also revealed that he met with Kobe Bryant on Monday and said the two discussed the movie “The Bodyguard.”

“I said I learned a lot of things from movies,” he recalled of his conversation with the Lakers star. “I learned how to make a speech from the movie called ‘The Bodyguard’ — Whitney Houston. When she sings the songs I look at her and say, ‘Wow, that is the way you make a speech.'”

Those first two paragraphs are a direct quote, from this article, published in the LA Times.

Jack Ma is the founder of Alibaba – the largest IPO ever. We can all learn something from the movies. Everyone can learn to make a speech, too; right, Toastmasters?